Expropriation - is the action by the state to take property from its owner for public use or benefit.

Restitution - is the restoration of something lost or stolen to its proper owner.

Land redistribution - the process whereby government require land from an owner and give it to another owner for whatever reasons..

A. Imagine the impact of the PARC philosophy on the land expropriation plan of the government:

Land expropriation is especially focused on "white" farmers. In line with the PARC philosophy of total racial defiance: Imagine all the “white” farmers would suddenly declare that they are not “white” people, but that they are South Africans. What will government then do? Still go ahead to expropriate their land in the absence of a race classification law?

SCENARIO A: An example of what could happen in real life.

Government official: Mr White racist farmer, we are here to take your land.

Government official: I can’t answer that.

SA Farmer: Fine, but can you legally proof by which law you claim that I am “white”. The race classification law, the Population Registration Act of 1950, was scrapped in 1991 by parliament. No law currently exist to determine a person’s race.

Government official: Are you blind? Are you trying to be funny?

SA Farmer: I am not a “white” person, I am a SOUTH AFRICAN. What you are saying makes me laugh as well.

Government official: Pack your bags, we are taking over legally!

SA Farmer: You are intending to redistribute my land to another South African person. Why? There is still so much unused land available, why don't you distribute and develop that land first?

Government official: Should I remind you again that you stole this land and genocide the first indigenous people of this land 300 years ago.

SA Farmer: I wasn’t born 300 years ago. I didn’t do such things. Is your land expropriation plan not exclusively focused on “white” people?

Government official: Yes, people like you. To restitute land back to “black” people.

SA Farmer: But I don’t regard myself as a “white” person. I can even claim that I am “black” if I want to. Self-classification and freedom of group association is my right. You first need to legally proof that I am a “white” person before you can do such things. I am not defined by the colour of my skin. Bring the criteria that government uses to determine a person’s race. Government cannot take land from a South African!

B. Our message of reconciliation: There is NO MORE "white" farmers in this country, only SOUTH AFRICAN farmers.

If you are a South African farmer and you are denying you race identity, and you support the vision of PARC, please let us know and hear from you. Email us your name, farm name and contact number to glensnyman1@gmail.com. 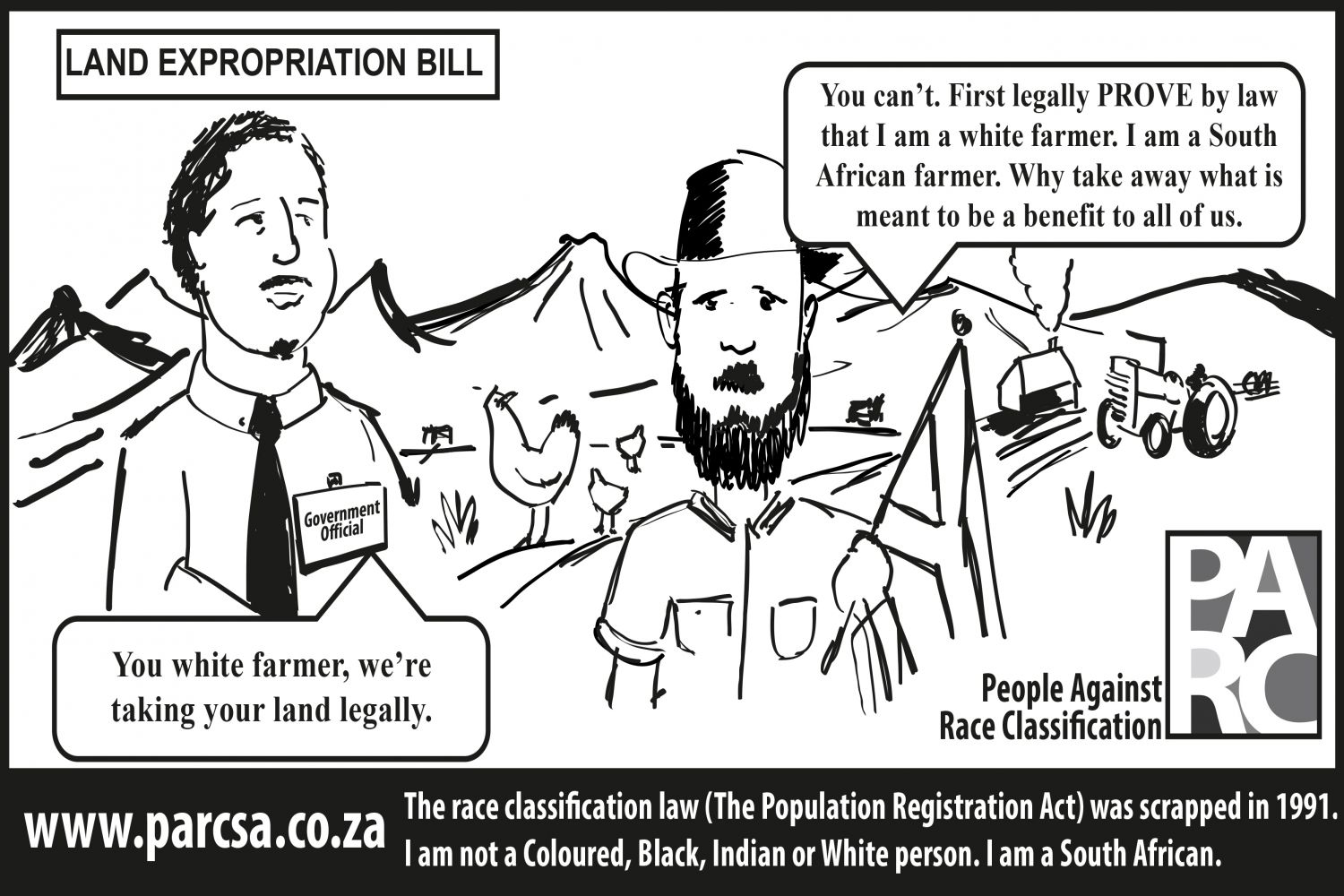 1. To whom does the land of South Africa belong to?

According to the history of how land ownership came about in South Africa: Before the Khoisan people came to the Southern part of Africa, no-one owned the land. According to history, the Khoisan people dwelled the land first. What we can derive from this is that, “first” makes you a owner of land first. The Khoisan people were renamed by the Apartheid government as Coloured people. Today these people are fighting for the recognition of their identity, culture, history and inheritage by the South African government. The black people (Nguni tribes) and the white people came to South Africa afterwards. So the land belong to the Coloured people.

They only need their votes and political confirmations. It is also not very eagerly propagated that white people are “Africans”. They are Africans because they are born here. In recent public debates leaders and members of the Khoisan communities told certain black leaders that the land of South Africa does not belong to “black” people. In response, black people want to enforce the identity of being black on the Khoisan people so that they might claim that they also speak on behalf of the Khoisan people. This is not true and the BEE policies proves it again. What did white people do up to now to help the Khoisan people to get their land back and how much land? Only part of it, or all of it?

The white settles came with knowledge to Southern Africa and started to develop the land. Was it wrong for them to do this? According to which law were they not supposed to work the land? If they worked the land, were they supposed to pay rent and tax to the Khoisan people for using the land? There were no formal systems and laws existing during that time. We cannot fix the past using today’s laws. We also don’t have all the prove of what happened and been agreed between the people during those times.

If the land should be given back to a previous owner, how are we going to separate the land from the assets (the house, infrastructure, labour time, etc.) that was invested on that peace of land? What is the purpose why “black” people want land back? Is it to farm, for housing or are they more interested in the investments that is currently on the piece of land? Land expropriation should never be used to punish white people for what happened in the past. Also, it must not be used to make white people to suffer and also become poor in life. Why should the current white people be made economically poor and suffer? There is no need for this. Rather, we should help all people to become economically wealthy.